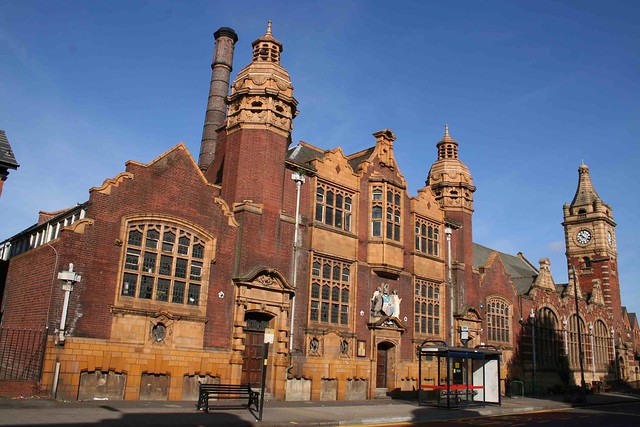 The Moseley Road Baths Coalition is delighted that Birmingham City Council has taken the decision to keep Moseley Road Baths open for swimming until the end of March 2018. This is great news for swimmers and fans of the baths, and for the community of Balsall Heath.

The recently-formed Moseley Road Baths Coalition is made up of the Friends of Moseley Road Baths, Moseley Road Baths Action Group, Historic England, the National Trust and the World Monuments Fund. The coalition team has been working with Birmingham City Council to explore a sustainable future for the baths that includes swimming, for what is unquestionably one of Birmingham’s most important heritage buildings and one of the nation’s most significant swimming pools.

The decision to keep the building open for swimming gives the Coalition, working together with Birmingham City Council, time to develop an alternative way of keeping the pool open (either through transferring operations to a Community Interest Company or via another operator), and to work on plans to bring all of the building back to life – a complex task which will require significant investment, given the scale and complexity of the backlog of conservation and building works required.

Vivienne Harrison, Chair of the Friends of Moseley Road Baths said: ‘The Friends of Moseley Road Baths are delighted that Birmingham City Council have agreed to keep our much loved swimming pool open until March next year.  For over ten years, we have been campaigning to save this locally, nationally and indeed internationally important heritage landmark and we appreciate the recognition of our efforts.  Moseley Road Baths is a vital facility for local people, a much needed meeting point which builds bridges between different sections of a diverse community and which contributes to improving health and lives in an area of high deprivation.  Of course, much still needs to be done and we look forward to working with Birmingham City Council and our coalition partners to secure a long term future for Moseley Road Baths.’

Birmingham City Council’s Deputy Leader, Cllr Ian Ward, said:  ‘I am delighted that the Council has made it possible for people to continue swimming at Moseley Road Baths until the end of March 2018. This will enable the Council to work with local and national partners to find a way to secure the long term future of one of Birmingham’s most important buildings, enabling people to swim there for another 100 years.’

Lucy Reid, Assistant Director of Operations at the National Trust said:  ‘Moseley Road Baths are a completely irreplaceable part of Birmingham’s history and a vital part of the city’s own story.  Thousands of Birmingham people have learnt to swim in these Baths and we want thousands more to be able to do so – this decision by Birmingham City Council is the first step in making this possible. The Friends of Moseley Road Baths and Moseley Road Baths Action Group should be thanked and congratulated for their tireless campaigning and commitment to the Baths.’

Rhodri Evans, Historic England Principal Adviser Heritage at Risk West Midlands said:  ‘We welcome the City Council’s decision to keep Moseley Road Baths open until March 2018. Moseley Road Baths is one of only 5 Grade II* baths in England and the oldest still in use for swimming. It has been on our Heritage at Risk Register since 2005 and we have already funded an Options Appraisal outlining a number of potential future uses. The additional time will enable us to continue working with the Coalition and the City Council to find a sustainable future for this significant symbol of Birmingham’s civic pride.

Professor John Darlington, Executive Director, World Monuments Fund Britain said: ‘A panel of international experts supported our view that Moseley Road Baths is unexpected, distinctive and different.  A building which speaks of a social heritage that belongs to a broad group of people rather than of fine country houses and the privileged. In 2016 it was one of only two buildings from the UK to be placed on the World Monuments Watch list. We are delighted to be a part of something that will save the Baths for future generations.’

Why is Moseley Road Baths special?

The baths are of great heritage significance and are an important part of our city’s identity.

Moseley Road Baths are the only Grade II* baths that predate 1914 and remain in use. One of the oldest of five Grade II* listed baths in the country, they contain some unique fixtures and fittings, including a complete set of 46 private washing rooms with baths (in use until 2004), and original oak ticket offices and attendants’ kiosks.  Also, possibly the only surviving steam-heated drying racks in a British swimming pool, and a three sided spectator gallery with unique balconettes in the Gala or First Class pool.

So significant are the Baths that the Friends of Moseley Road Baths secured the interest of the World Monuments Fund, who added the building to their World Monuments Watch List in 2016 of 50 important buildings and monuments from across the globe.

Built to encourage Balsall Heath to join the Corporation of Birmingham in 1907, the baths and the adjacent library are full of glorious details and both interior and exterior are a real testament to the designers, manufacturers and workmanship of Birmingham and Britain at this time. It spoke of a huge civic pride of a city and its people.