It was announced on 15th October in New York by World Monuments Fund President Bonnie Burnham that Moseley Road Baths has made the WMF’s 2016 World Monuments Watch List.

It is one of only two buildings in the UK selected for inclusion on the 2016 World Monuments Watch List. The list is published every two years in order to focus attention on sites of architectural significance around the world that are under threat.  The Baths gets a full feature on the WMF’s website, explaining why it was chosen.

Supporters fighting to keep the Baths open have welcomed the news as recognition of the architectural importance and social significance of the Edwardian building.
Moseley Road Baths is the oldest of only three Grade II* listed swimming pools in Britain. It was opened in 1907 and the building is believed to contain the only surviving example of a laundry room with its original drying racks. In an age before laundrettes, local people would have used the room and the racks for their clothes washing.
The ground floor includes a set of pre-war private slipper baths, said to be unique. There are no other examples remaining of this type of bathing facility that was used by local people until 2004. The cubicles contain cast iron baths, some with ropes still hanging over them to help people get in and out as well as the bell system used to call attendants if bathers were in difficulties.

There are two swimming pools, one of which is still in use by local people and schools throughout the week. Both have ornate, cast-iron girders supporting the roofs and the now disused Gala Pool is lined by glazed brick dressing boxes. Only one other pool in Britain still has these; wooden partitions were more common in Victorian and Edwardian periods.

The application for World Monuments Watch listing was submitted by the Friends of Moseley Road Baths (FofMRB). The group has been campaigning to keep the swimming pool open since 2006. Dates for closure of the building have been announced by the owners, Birmingham City Council, on numerous occasions but each time, action has been postponed. FofMRB members have raised the profile of the Baths with a series of arts events and open days while a number of organisations have used the building for filming.

An application for Heritage Lottery Fund support was due to be submitted but this had to be abandoned after Birmingham City Council withdrew its support. The building is now expected to close before the end of 2016.

Commenting on the inclusion of Moseley Road Baths on the 2016 World Monuments Watch, Mark Gunton, Treasurer of the Friends of Moseley Road Baths said, ‘Obviously we’re delighted to have been included but we know that this isn’t the solution to the crisis facing Moseley Road Baths. We still have to work hard to get organisations and individuals to commit to saving the building, keeping it open as an active swimming pool and to finding additional activities to make it a viable concern. The great thing about the Watch listing is that it focuses attention on our campaign and hopefully will help to open new doors for us so that we can protect this wonderful part of Birmingham’s history’.

The Friends of Moseley Road Baths will be marking the building’s inclusion on the list through a celebratory event on 31st October, which will also mark 108 years since the building first opened its doors to the public.  More details will follow soon!

Moseley Road Baths got a plug on BBC Radio 4’s ‘A History of Britain in Numbers’ this week.  Presenter Andrew Dilnot visited the pool and spoke to Steve Beauchampé about the Victorian vision that was responsible for the development of these kind of municipal buildings, particularly in Birmingham.

You can ‘Listen Again’ online, the whole programme is only 15 minutes long, Birmingham is featured from around 5:55mins.

In order to raise the profile of the building and in recognition of its unique place in our collective heritage, a World Monuments Fund 2016 Watch application has been submitted for Moseley Road Baths by the Friends of Moseley Road Baths. 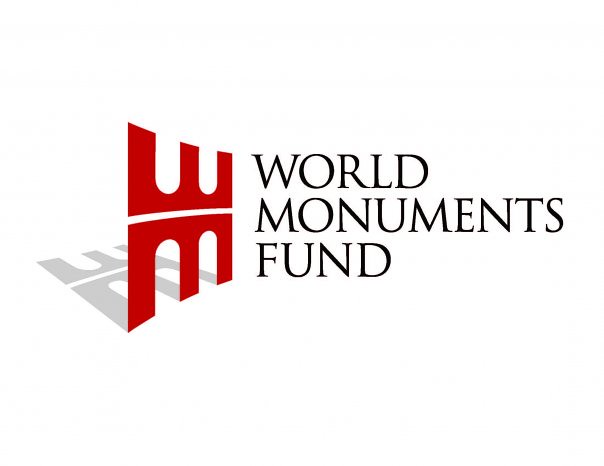 The Friends of Moseley Road Baths are hosting a ‘Keep Moseley Road Baths Open Day’ on 8th March, 10am-2pm, to mark the 108th Anniversary of the building opening its doors to swimmers.  We hope to demonstrate just how wonderful and relevant the building is, in spite of Birmingham City Council’s plans to close the facility in 2016. 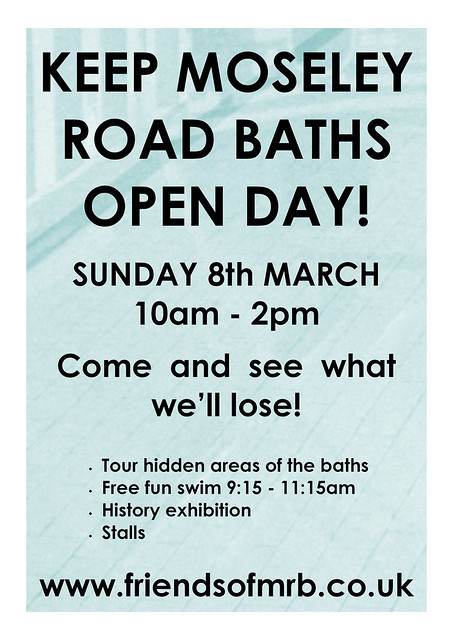 Whilst the building itself opened on 30th October 1907 for washing and laundry facilities, swimming pools at the time were only used in warmer months, so it wasn’t until Spring 1908 that swimmers were able to take the plunge.  During winters, pools were usually emptied and boarded over for social activities, including dances, billiards and card games.  Moseley Road Baths was also used as a Casualty station during the Blitz.

On the day there will be an opportunity to take a tour of areas of the building which are normally closed to the public – previous tours have been really well received and we encourage visitors to take lots of photos!  With the building due to close its doors for the last time next year, this may be one of the last opportunities for the public to see areas such as the Gala Pool, Laundry Room, Boiler House and original Water Tank.  As well as members of the Friends of Moseley Road Baths, we are also pleased to welcome former employee John Berrill who will be on hand in the plant room to answer questions.

Swimmers of all ages can head into the water for a free fun swim on us, with floats and toys in the pool between 9:15am and 11:15am.  This will be on a first come, first served basis, so arrive in good time!

Members of the Friends of Moseley Road Baths will have a stall where postcards and our book will be available to buy, and visitors can learn more about our campaign.