After a hugely successful gathering of swimmers and pool supporters for a unique photo shoot, Attilio is now set to unveil his work to the world this Thursday.

In a truly humbling display of just how well loved our local pool is, photographer Attilio Fiumarella and the gang over at Some Cities succeeded in getting 110 swimmers together to stand in the empty Gala Pool in their swimming costumes on a sunny Sunday morning to show their love for the building – and dismay at its proposed closure.

The shoot was a massive boost to the campaign against the proposed closure of the building – earmarked for September next year.  There was such a fantastic, good natured atmosphere – it was so lovely to see so many pool users coming together.  Attilio captured a real cross section of the community who gather at the pool each week.  The event really illustrated what a diverse bunch we are – babies and toddlers lined up next to pensioners, keen lane swimmers next to ‘Strokes’ pupils, club swimmers alongside the Aquarobics devotees and members of the Friends of Moseley Road Baths next to pool staff.  That unique community is what we stand to lose if the pool closes.

The powerful images from the photo shoot were picked up by local news outlets, and soon the story grew to become the third most read story on the BBC News site, it was covered in the Daily Mail and we even gained coverage of our ‘Warrior Spirit’ as far away as Scotland!  Twitter went wild with the #100swimmers hashtag, and we even got a Tweet from Jeremy Vine!

Thanks to everyone who helped to spread the word and who shared their images and thoughts on the day.  Esther Barnes documented the shoot and has produced some lovely images.  Matthew Walters was one of the ‘Terracotta Army’ who took advantage of the event to take some gorgeous shots of around the building.  Proof as ever that this building continues to inspire.

Attilio’s image from the photo shoot will be unveiled this Thursday July 31st, from 6.30pm, at The Old Print Works, over the road from the baths – and all are welcome – whether you participated, spread the love online or only saw the story in the press.  Attilio will be there to answer questions about the project. 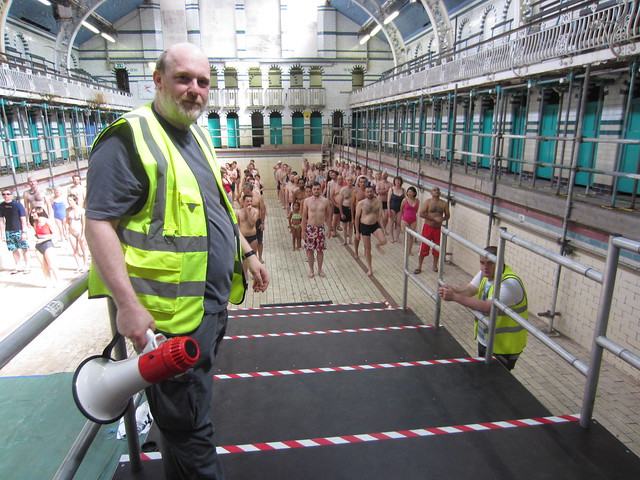 The Friends of Moseley Road Baths want to extend a huge thank you to Attilio for his vision and talent in bringing the project about, the team at Some Cities for supporting such an ambitious and exciting project, Ian Edwards (pictured above with his loudspeaker!) for his expert direction of the swimmers, to the crew who were running round supporting Attilio, to all of the swimmers who gave up their morning to stand around in an empty pool, and of course, thanks are also due to the pool staff for accommodating the event.